To kick off October, Andrew and I had a little fun pumpkin carving! And in not-so traditional fashion… using our new power drill! To make it even more fun, we live streamed it on Facebook. It got a little messy and we ran into a few bumps, but no surprises there!  😆 Tools (this list contains affiliate links, which help me keep this blog up and running – more on that here): As per usual, the first step is getting the pumpkin cleaned out. I found a tip online about cutting out the bottom of a pumpkin (and throwing it out!) instead of the top. Apparently, it helps the pumpkin keep its moisture longer. It’s also easier/safer to light the candle and place the pumpkin on top vs. having to set a candle down inside. Also, don’t you dare throw away those seeds! I easily roasted them for a tasty snack, which I’ll cover in a little bit. For now, get the insides scraped out and set the guts aside.

Next, choose your pumpkin carving design and use a marker to make a few guiding points. For our jack-o-lantern, we made dots on the corners of the eyes, nose, and mouth. We used a Sharpie and the dots didn’t wash off very well, but you could use a washable marker for more robust guidelines and wash them off afterward.

Before you get started, keep a few things in mind:

After drilling, most of the holes had some pumpkin guts in them. They were tedious to clean out with a skewer, so I ended up blowing into them. I felt like I was giving “Charlie” CPR. Or as Andrew added, “Cheating on your husband?”  😆  Hey, it worked! Viola! No jagged edges, just a cleanly drilled pumpkin. I really appreciated not having to use a knife and risk cutting myself. While the gut-scooping took about 10 minutes, we drilled BOTH pumpkins in less than 10 minutes! I’ll take it. After we drilled the holes we rushed to light up our new jack-o-lanterns, but the candles started to dim when we put the pumpkins over them! To remedy this, we drilled a few additional holes in the back of the pumpkins to increase the airflow. Now, for their “shining” moment! Ha. Don’t Forget About the seeds!

Beautiful, scrumptious seeds. I had never roasted pumpkin seeds myself, but I have fond memories of my brother making them when we were younger! Then he would eat all of them and not share.  🙄

I found this simple recipe from Food Network: I hope you give the power drill a try on your pumpkins this year (and eat your seeds!)! If you do, let me know in the comments. Happy Fall!!

Pin it for later! 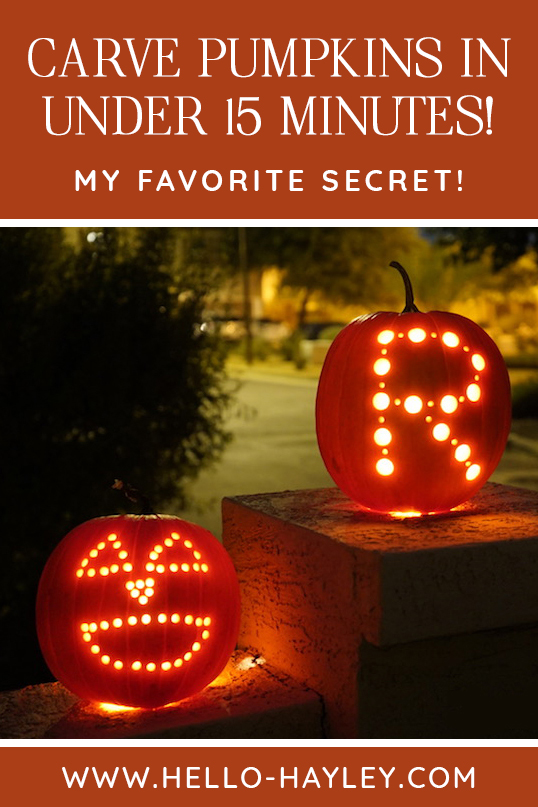